Back in the 70's I took a few philosophy classes at Tufts University. Among the things I read were Martin Heidegger’s Being and Time, and Must We Mean What We Say? by Stanley Cavell. The classes were real eye openers for me. I thought that thinking in a determined way, using a philosophic method so to speak, would provide me, as a young artist, a unique and personal method for making art. To this I added in my mind some of the published writings of Marcel Duchamp. I can’t overstate the importance of Duchamp to young artists in the1970′s. The “the creative act” lecture that Duchamp gave in 1957 proposed that the artist was a medium through which a work was presented, but it was the spectator and ultimately posterity that determined the art status of the work.

“All in all, the creative act is not performed by the artist alone; the spectator brings the work in contact with the external world by deciphering and interpreting its inner qualification and thus adds his contribution to the creative act. This becomes even more obvious when posterity gives a final verdict and sometimes rehabilitates forgotten artists.”
Marcel Duchamp Session on the Creative Act Convention of the American Federation of Arts, Houston, Texas, April,1957

That basic proposition became the kernel of everything I began doing. I started a series of works that took the form of a contract. This gave me the freedom to explore different ideas. Each piece included the quote:
“ALL THAT IS REQUIRED FOR THE COMPLETION OF THE CONTRACT IS YOUR SILENT AFFIRMATION.” 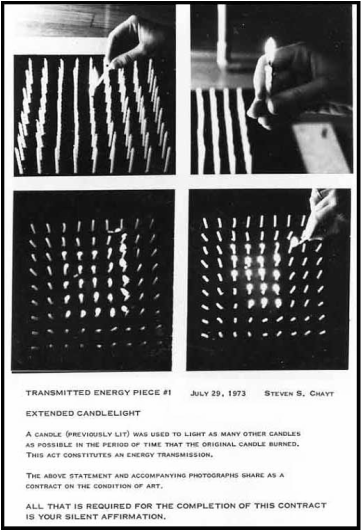 ​I was trying to tap into the idea that Stanley Cavell called “fraudulent” and later Robert Hughes called “shock of the new”. Since modernism, audiences had to deal with the uncertainty of the legitimacy of new work.

The Cavell essay, Music Discomposed includes many passages about how the struggle with new art can yield unique realizations.
​
“What they suggest is the possibility of fraudulence, and the experience of fraudulence, is endemic in the experience of contemporary music; that its full impact, even its immediate relevance, depends upon the willingness to trust the object, knowing that the time spent with its difficulties may be betrayed. I do not see how anyone who has experienced modern art can have avoided such experiences, and not just in the case of music.”

“A work of art does not express some particular intention (as statements do), nor achieve particular goals (the way technological skill or moral action do), but, one may say, celebrates the fact that men can intend their lives at all (if you like, that they are free to choose), and that their actions are coherent and effective in the scene of an indifferent nature and determined society. This is what I understand Kant to have seen when he said of works of art that they embody “purposiveness without purpose.”
Stanley Cavell’s essay “Music Discomposed”, from the book Must We Mean What We Say, 1969

​I wanted to make work that was about the process of overcoming the doubt Cavell spoke about. To me this could represent a spiritual connection between conceptual art and say artists like Marc Rothko or Barnett Newman. I was convinced that I could make art that was challenging, but ultimately spiritually fulfilling, but it would have to require a lot of work on the spectator’s side of the contract. In a way, they would be doing most of the work.
I used the contract form to create a number of different types of pieces. Some involved ideas of energy transmission,  others involved statements concerning art and others concerned statements of faith. Each piece, no matter what the stated subject, explicitly sought participation of the viewer. That’s what “silent affirmation” meant. 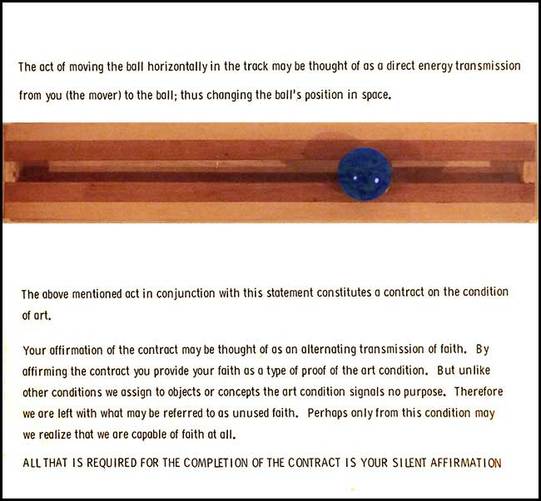 Of all the contract pieces, the “Ball Piece” best expressed the idea I had in mind. It begins as an energy transmission piece, the idea of moving a ball in a track. Then moves to comment on the “condition of art” and finally includes ideas of faith. Everything I was interested in combined in one unassuming piece. To me, this was the final ultimate expression of what I was doing.
Text from the Ball Piece:

The act of moving the ball horizontally in the track may be thought of as a direct energy transmission from you (the mover) to the ball; thus changing the ball’s position in space. The above mentioned act in conjunction with this statement constitutes a contract on the condition of art. Your affirmation of the contract may be thought of as an alternating transmission of faith. By affirming the contract you provide your faith as a type of proof of the art condition. But unlike other conditions we assign to objects or concepts, the art condition signals no purpose. Therefore we are left with what may be referred to as unused faith. Perhaps only from this condition may we realize that we are capable of faith at all.

​For me it was a perfect example of the relationship between the artist, the work, and the viewer. The problem was it also seemed to represent a dead end. I could not imagine doing any more contract pieces and avoid redundancy.

This corresponded with leaving Boston and heading to Cal Arts for a Masters program. During the trip out west It occurred to me that I needed a different way of exploring the fundamental ideas the Ball Piece represented. I knew that the contract pieces looked too much like the conceptual work of artists a generation or two my senior. It was just too black and white with straight text. I can’t overestimate how art students then, and probably now, imagined themselves strategically in the history of art. I knew I had to break away from all that Conceptual Art looking stuff and try to use a new approach to reach my goal. I wanted my audience to experience the struggle of working from what seemed like very trivial or even silly stimuli to reach a cathartic experience. I was trying my hand at conjuring up what I imagined was all the existential angst of the 1940s and 50s, but through a more ironic method. 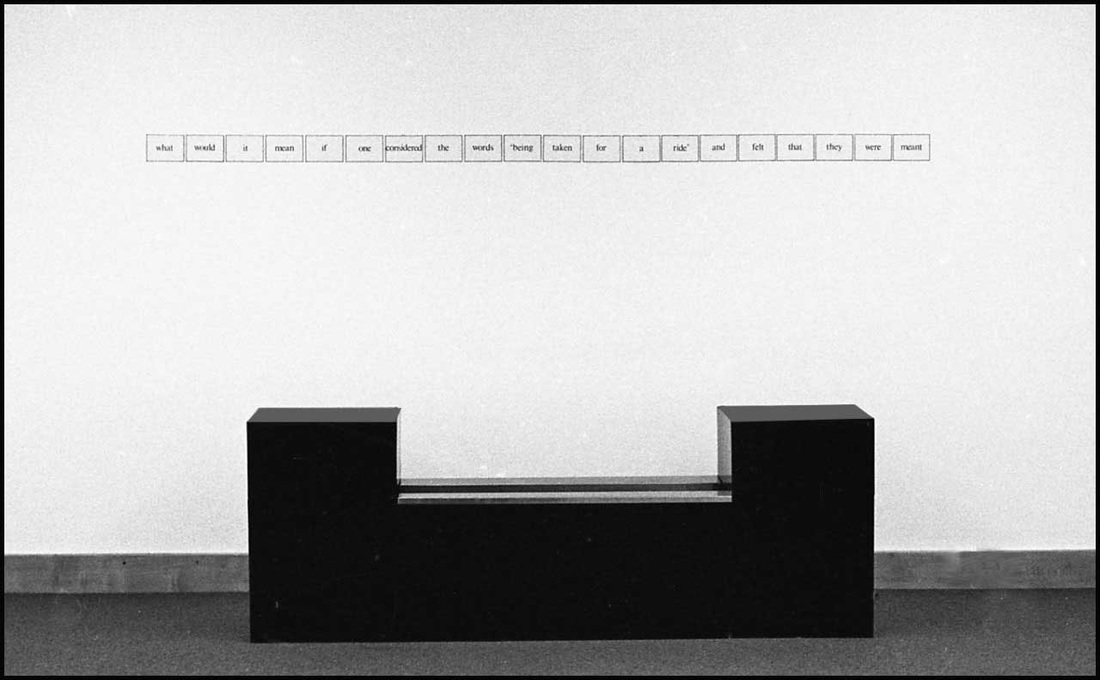 Installation view of Boat Ride
It was during the ride to California that I had the idea for a work called Boat Ride. The essence of the Ball Piece was a ball moving in a track from left to right. The essence of Boat Ride is a small bronze boat moving in a track from left to right. Think of a carnival shooting gallery. I was hoping to make a piece that could appear romantic and poetic but silly and trivial all at the same time. I wanted the piece to invite the viewer to first dismiss the work, but to reward those who mentally stuck around. Here again, I was interested in what Stanley Cavell called “fraudulent” and later Robert Hughes called “shock of the new”.

Boat Ride was installed in a very small gallery space. It was the only piece in the room. The spectator entered the space and could hear the sound of water coming from a very simple “minimalist” black box. Hanging on a side wall of the entrance was the following:

The tone of the poem is meant to be romantic.
​It was very influenced from reading Martin Heidegger especially Poetry, Language, and Thought.

As the spectator moves closer to the box the small bronze boat becomes visible as it moves in a track from left to right. On the back wall is the statement:
What would it mean if one considered the words ‘being taken for a ride’ and felt that they were meant
This statement really functions as the heart of the piece. The riddle being taken for a ride could mean a number of different things; an act of deception, a victim of a con job, even a gang murder. But the follow up felt that they were meant implied a litteral meaning, that you were in fact in the boat.  This reading of the statement relates back to the ball piece (By affirming the contract you provide your faith as a type of proof of the art condition) The spectator is expected to suspend disbelieve and thus is rewarded with the recognition that they are capable of faith at all. A pretty tough proposition I grant you. But that’s what the piece is about.

I followed up the next year with Landing. An installation in a much larger room that includes two facing benches and a table with four hand printed books in the middle of the room. On two side walls hung printed windows (port holes). On the back wall, hung very low, was a framed photograph of Boat Ride.  Spectators were allowed in four at a time and invited to sit and read the books. Each book contained a play that takes place inside the boat. The spectators assumed the role of characters in the play.
I wanted the  Boat Ride / Landing combination to speak to the audience in the form of a  myth. Influenced by Martin Heidegger, the piece explores “Being” in a number ways. I was interested in the role infinitives play in language. I wanted spectators to feel the weight of being there; to learn how to sit. I was trying to make even the trivial feel like it was a matter of life and death. 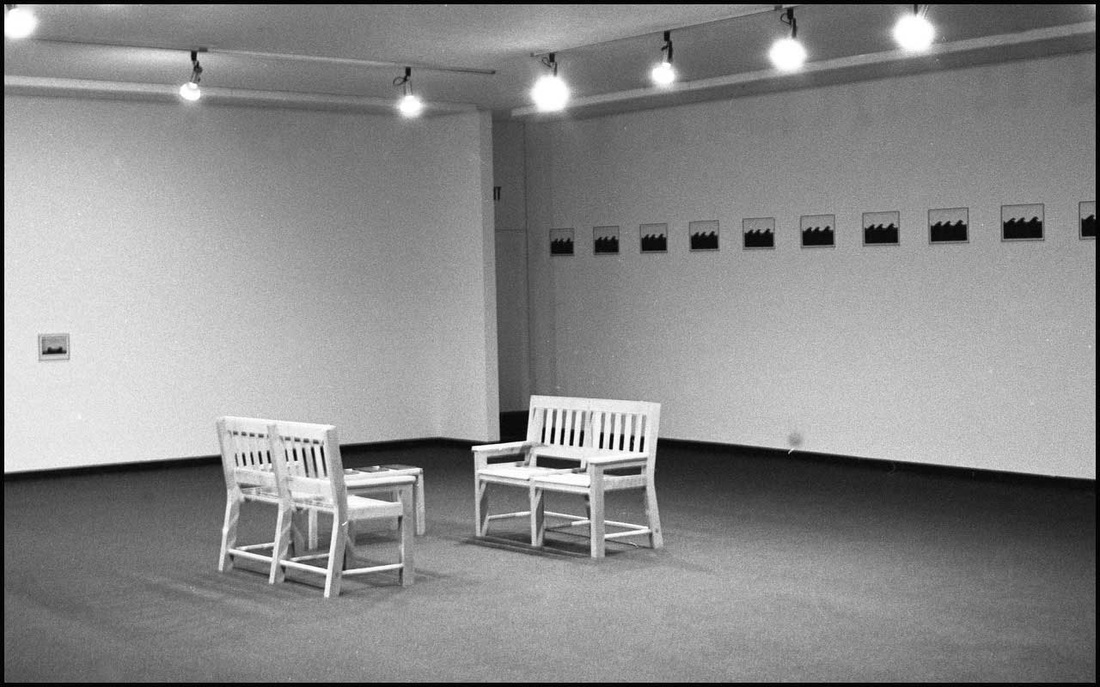 Since leaving school in the 1970s I have produced a very few number of pieces, some I gave away or just kept. I never made any attempt to show the work. I guess I was following Marcel Duchamp when he said:  The great artist of tomorrow will go underground.
Marcel Duchamp, March, 1961

Here are some examples of work I did during that period. I never gave up on the idea that my art should present a challenge to the viewer. 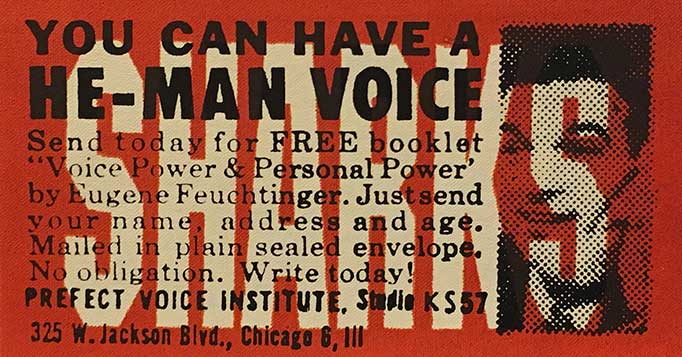 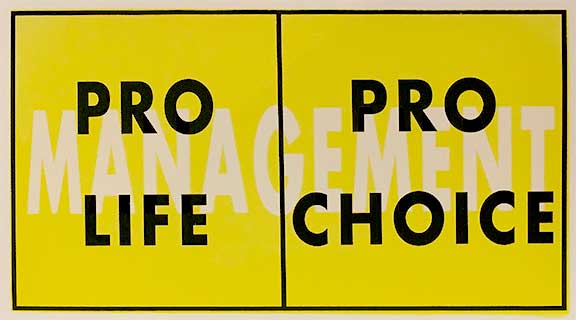 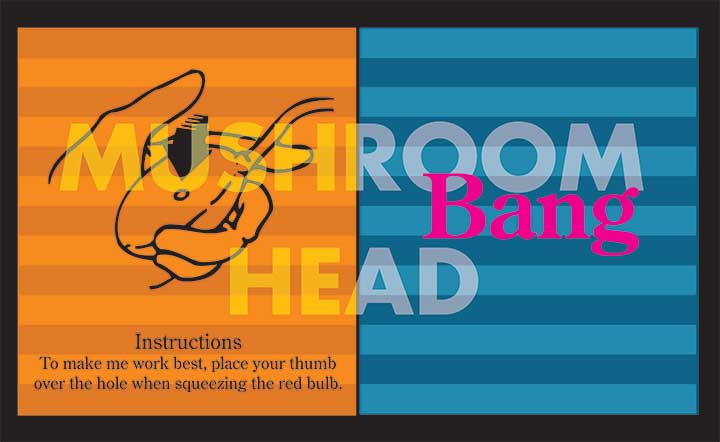 Once I retired from teaching I was determined to start making art again. I am determined to continue working on art that is challenging and provocative. Please visit the HOHO Chair and the Binocular Series pages on this site to review my current work.